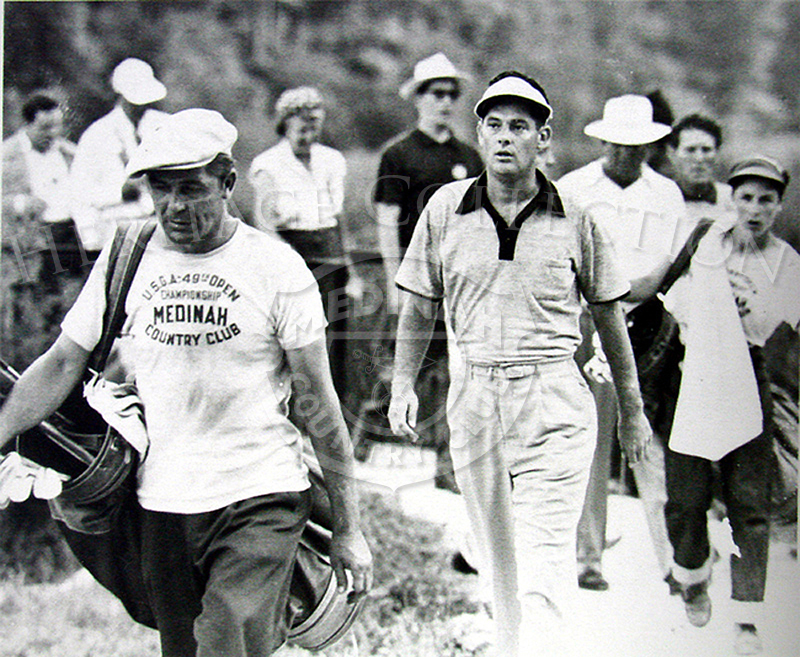 Only 27 years old, Dr. Cary Middlecoff was on his way to winning the 49th United States Open Championship. The photo caption read: "Open wide now; this won't hurt a bit," said Dr. Cary Middlecoff as he walked to the 72d cavity at Medinah and applied the National Open crown with a 286." Middlecoff's score was two over the combined par of course No.3. He was awarded $2,000 from the $10,000 purse. The 49th U.S. Open was held June 9-11, 1949, was the first to be televised, and featured Bill Sterns doing the coast-to-coast broadcast. NBC bought the radio and television rights to all USCA events for $5,000. Cropped versions of this image were featured on the front covers of the July, 1949 issue of Golfing magazine and May 1962, Vol. 38 No. 5 Camel Trail. Trailing Middlecoff in the large white hat is Clayton Heafner, who also trailed Middlecoff by one stroke at the end and finished in a tie with Sam Snead.