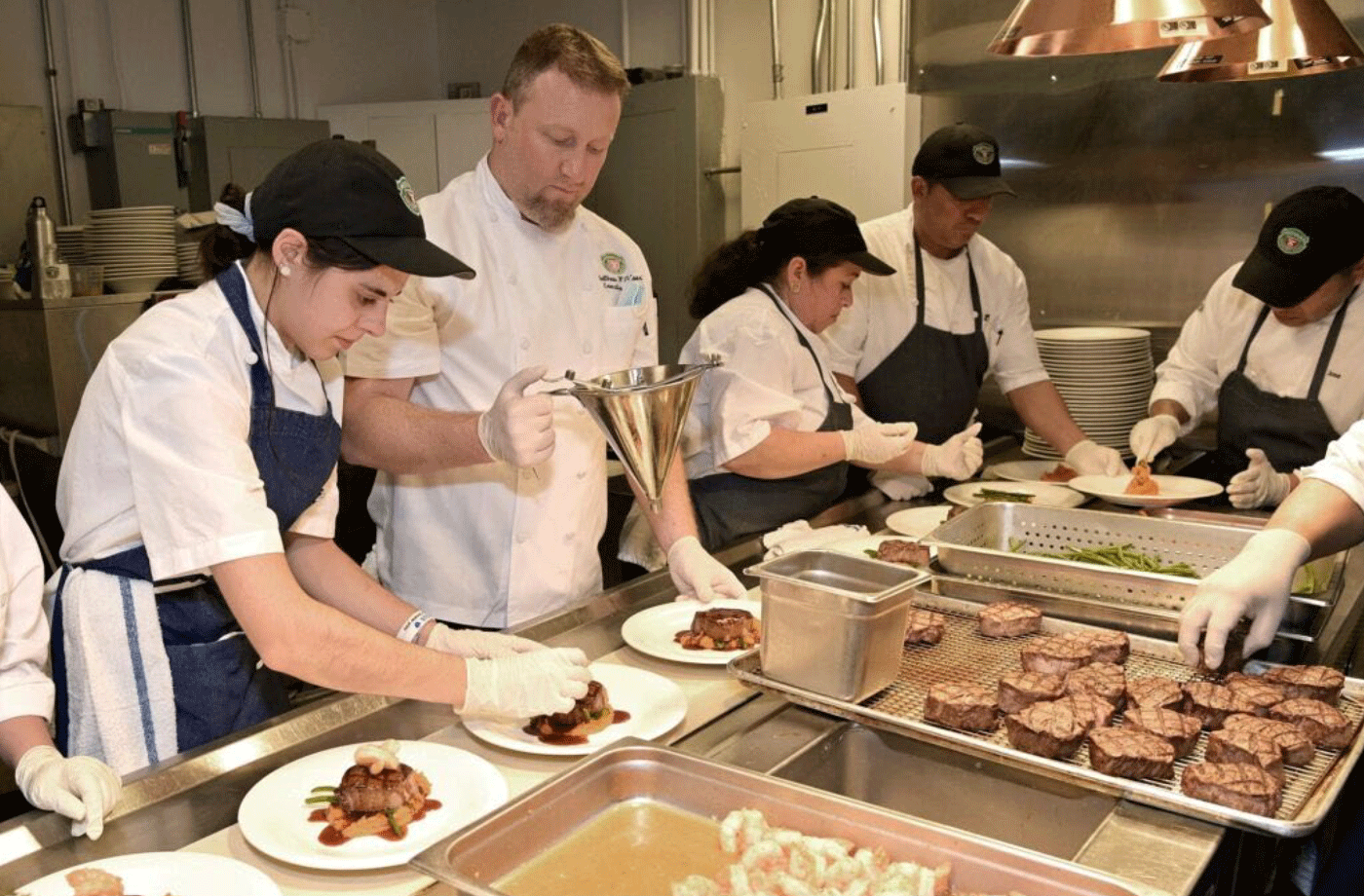 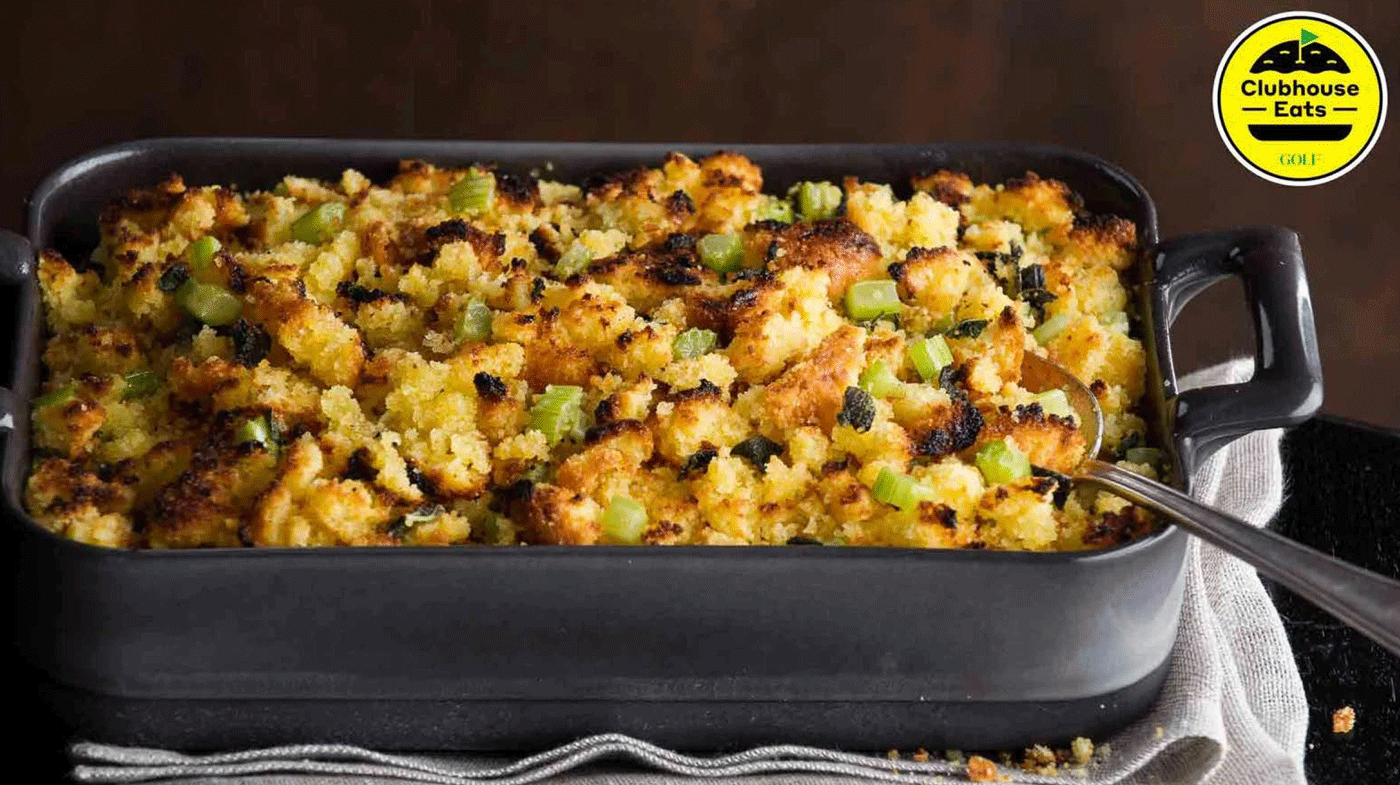 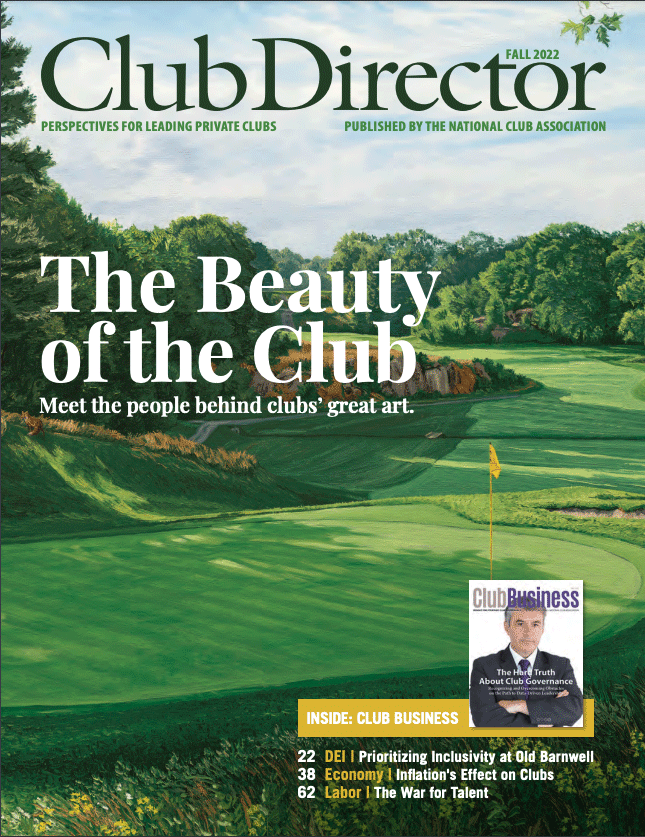 Club Director Fall 2022 Magazine
The Beauty of the Club – Meet the people behind clubs' great art. 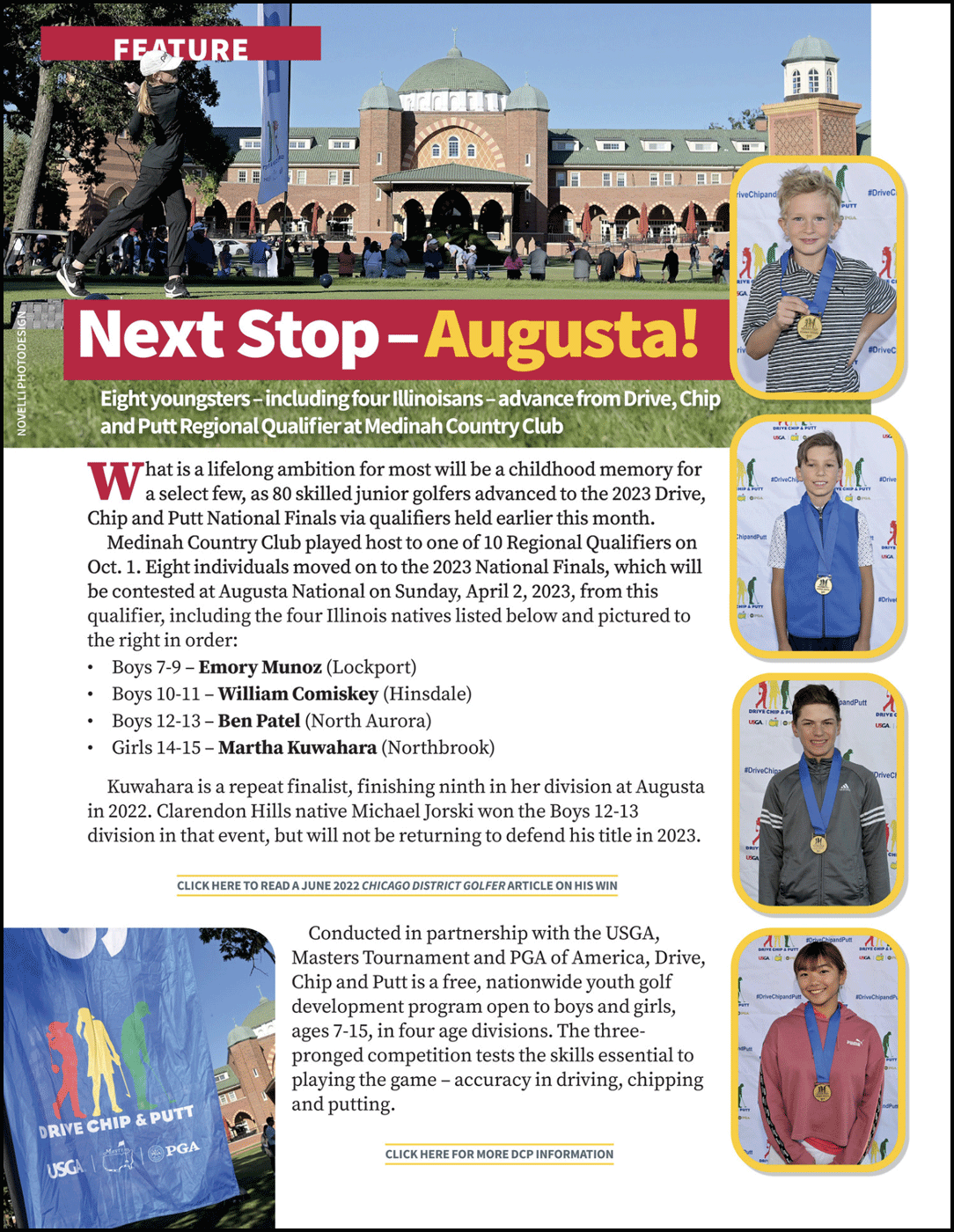 …Women's Invitational will be played at historic Medinah Country Club. ... PGA Championships, the 2012 Ryder Cup and the 2019 BMW Championship. 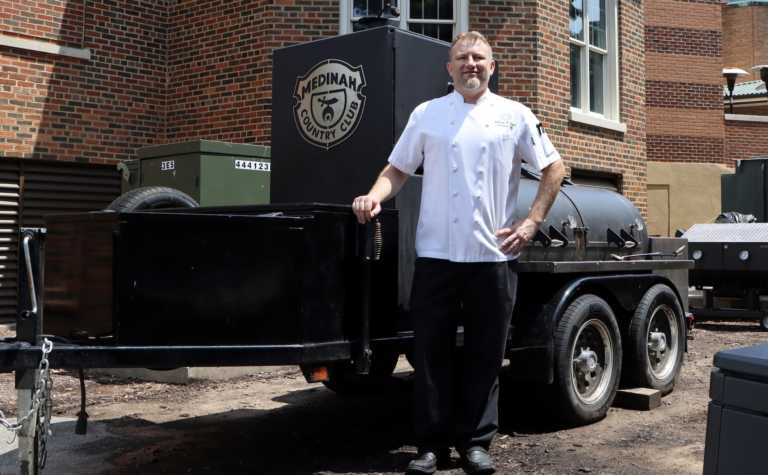 Even the most common ingredients get a wow factor when they are cooked outdoors by some of the private club industry's top chefs. 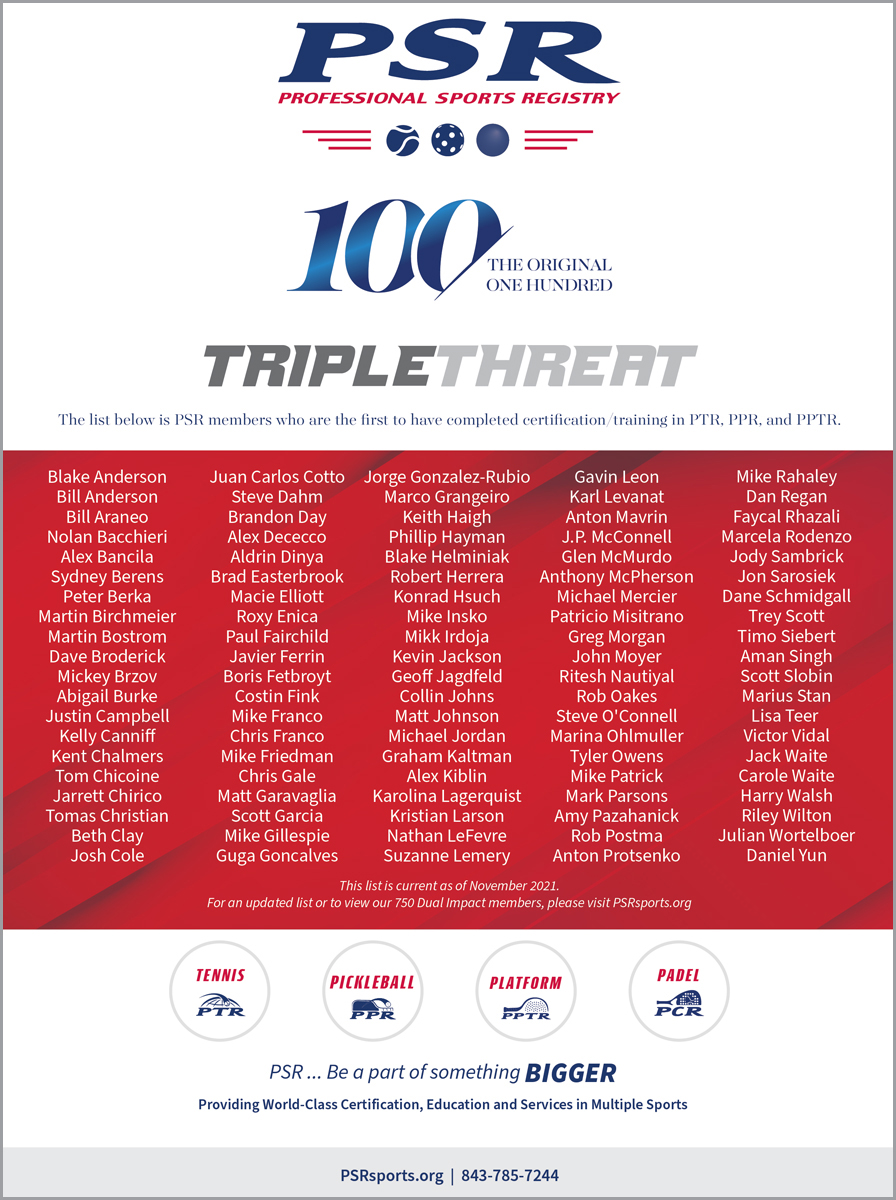 This was featured in the January 2022 Racquet Sports Industry (RSI) magazine. Click here to view the list. 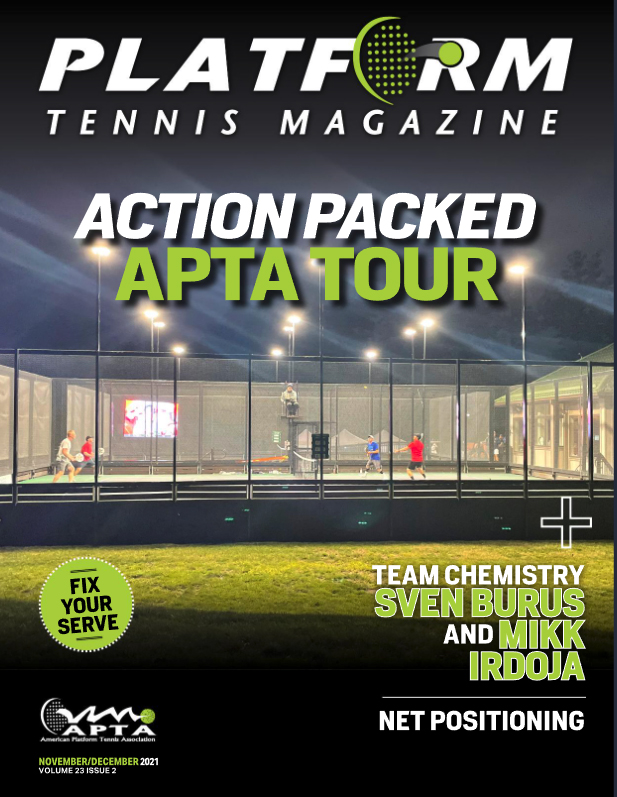 Medinah Country Club's Racquet Center recently hosted the I-355 Cup, which is featured on the cover of the "Platform Tennis Magazine." See recap on page 14. 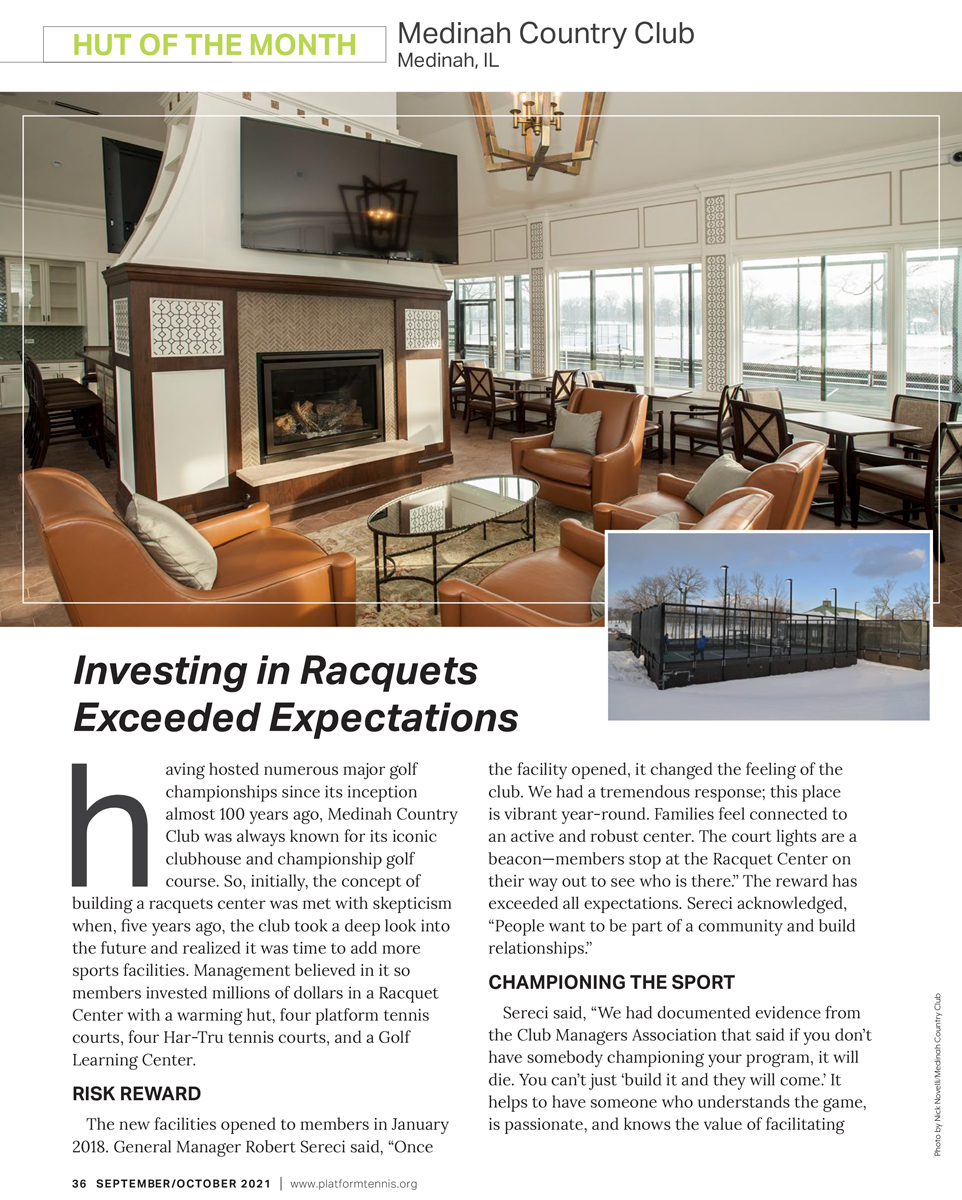 Hut of the Month 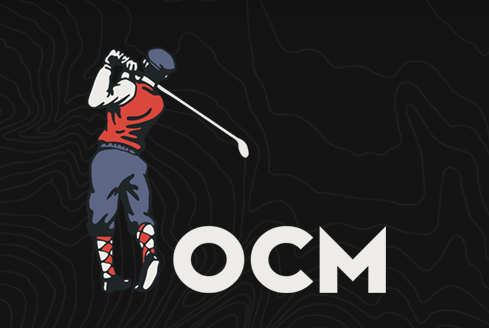 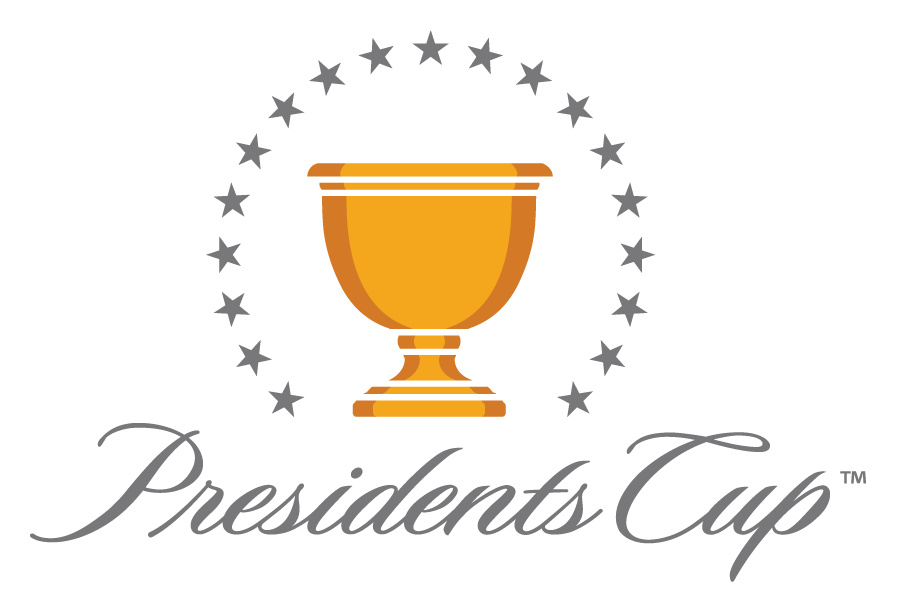 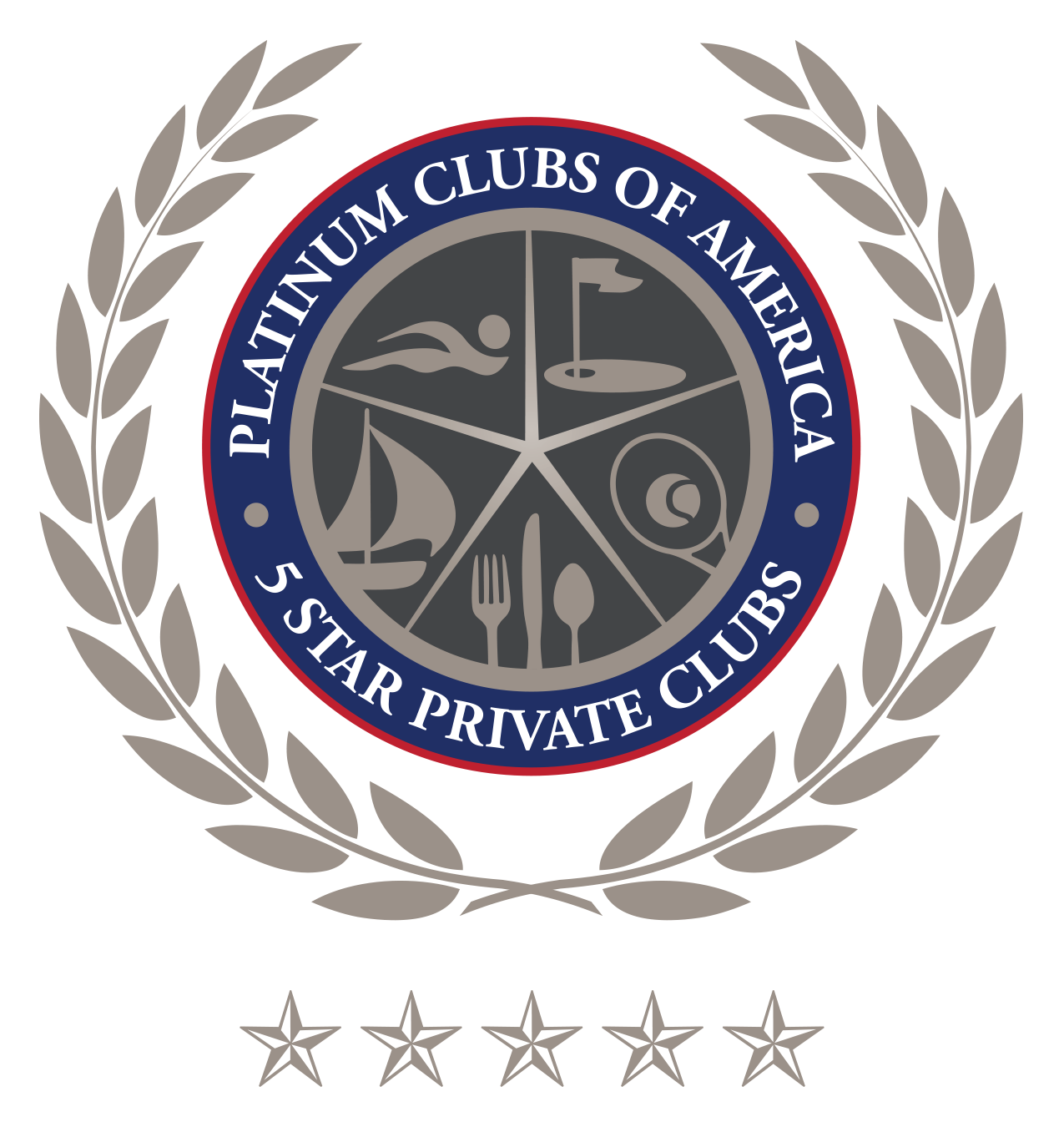 2021–22 Results are in and Medinah Country Club is honored to be recognized with a ranking of 12th in America! 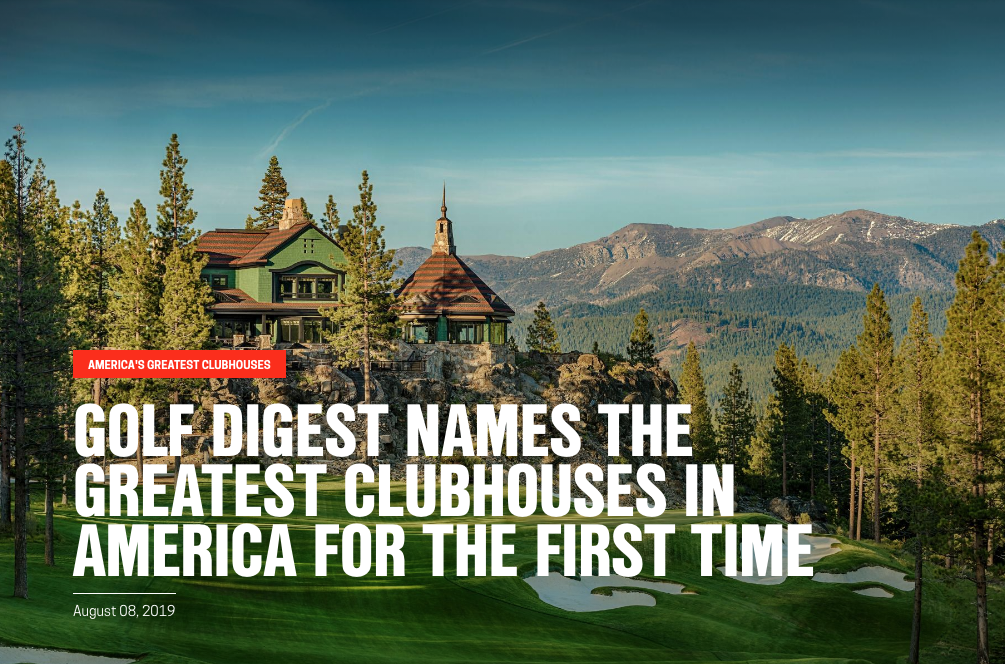 Unique among clubhouses, Medinah Country Club has worldwide recognition and was also recognized as one of the Greatest Clubhouses in America. 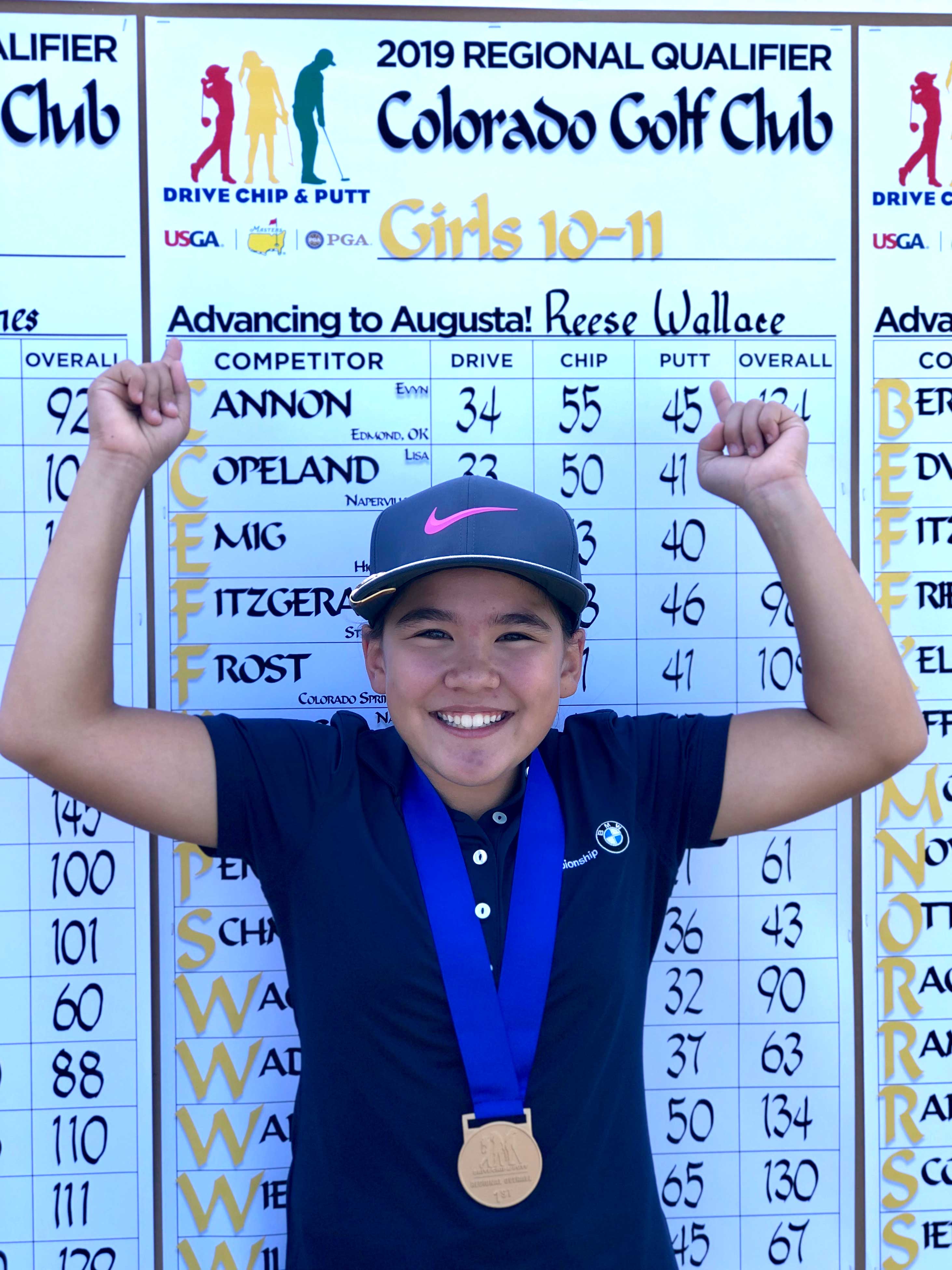 Medinah Junior Reese Wallace is one of the regional winners and a national finalist (Girls 10-11) in this year's Drive, Chip and Putt which was held at Colorado Golf Club. Reese will be headed to Augusta this April. 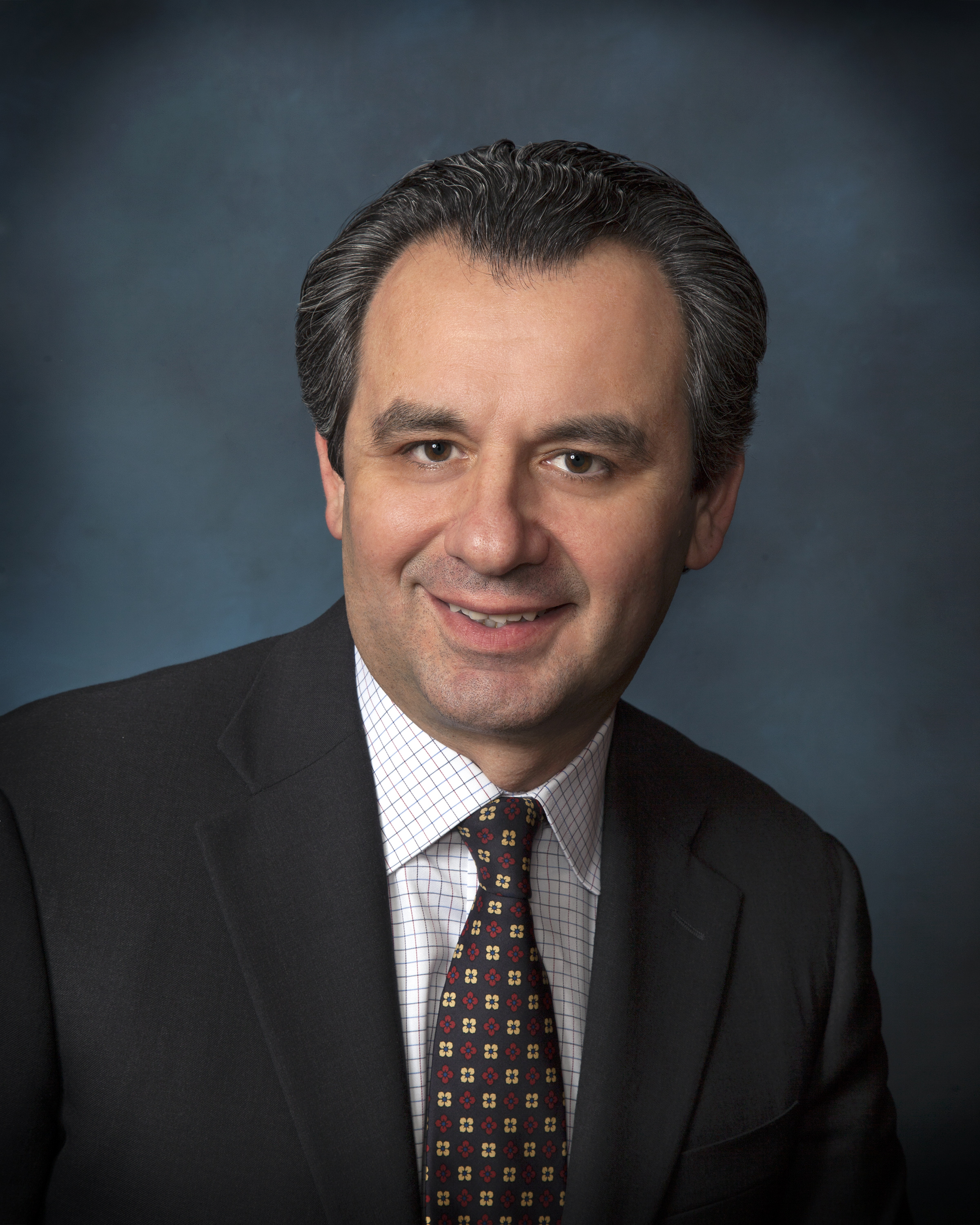 Club + Resort Business, in conjunction with the McMahon Group, Inc., the St. Louis-based consulting firm and the National Club Association (NCA), have announced the 2019 recipients of the Excellence in Club Management (ECM) Awards, established in 1997 by the McMahon Group and co-sponsored since 2005 by C+RB. The NCA joined as a sponsor for the 2018 Awards. 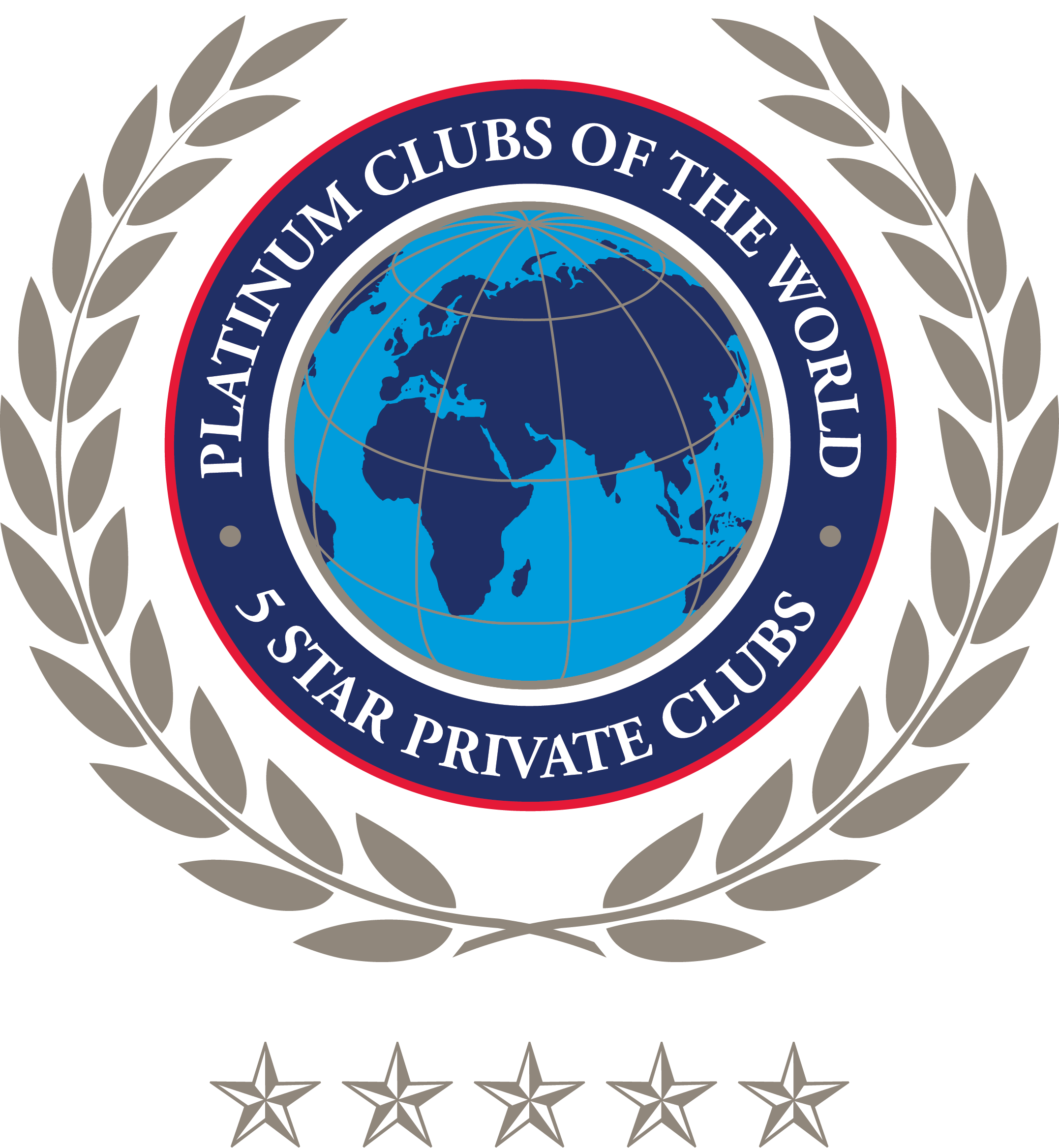 2020 – 2021 Results are in and Medinah Country Club is honored to be recognized with a ranking of 34th in the World! 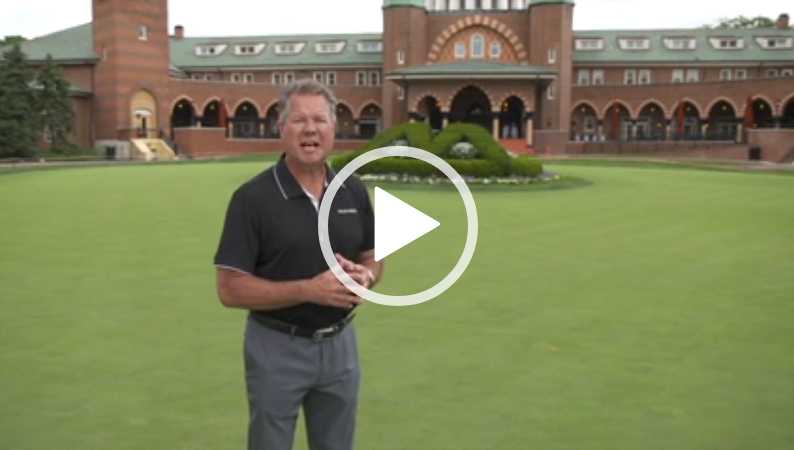 The Golf Scene with Steve Kashul 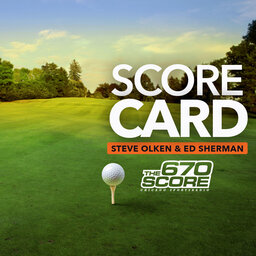 In the second hour of the Scorecard Steve & Bob preview Medinah with Ryan Potts, the Lesson Tee is with Ethan Roush, and they end the hour discussing the importance of staying fit for golf with Mark Palmiri. 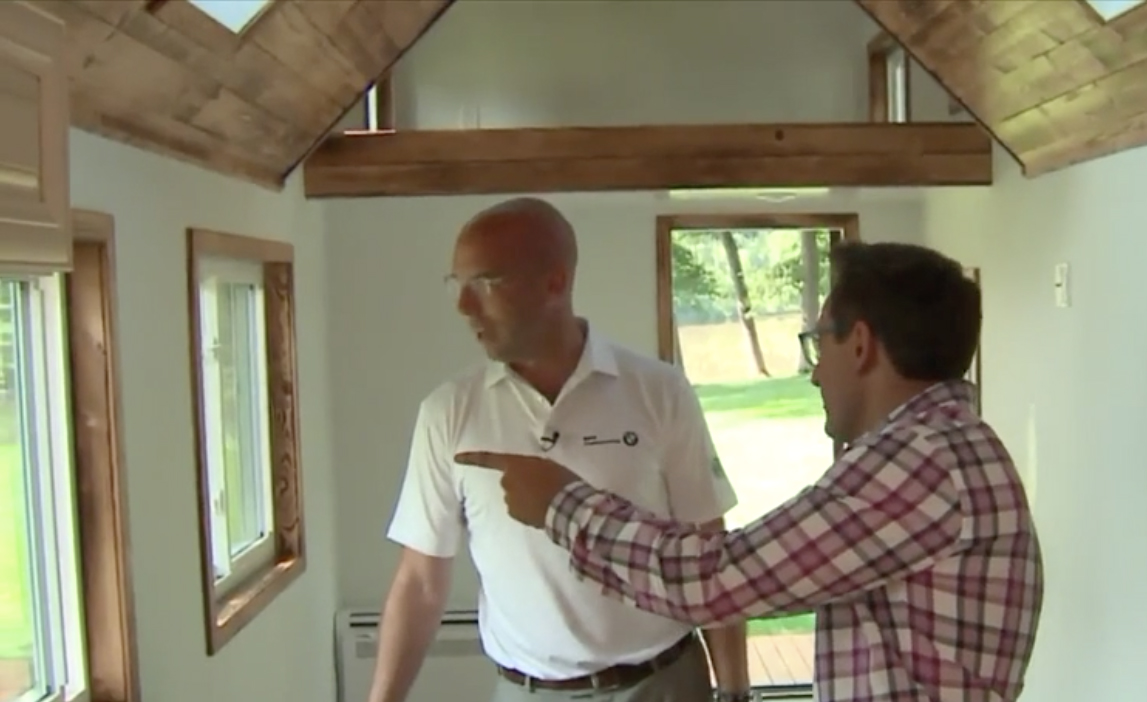 A sneak peek of the BMW Championship at Medinah Country Club

The BMW Championship will kick off next week at Medinah Country Club and Marcus Leshock got a sneak peek to see how setup was going. 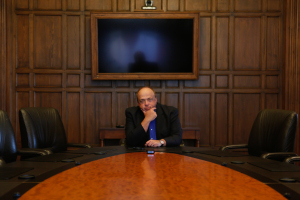 The BMW Championship Returns To Medinah This Month

THE LAST BMW Championship is coming to Medinah Country Club, the week of August 12-18.

Keegan Bradley is the defending champion, and via video hook-up he joined the media day press conference at Medinah yesterday. You can hear from him below. 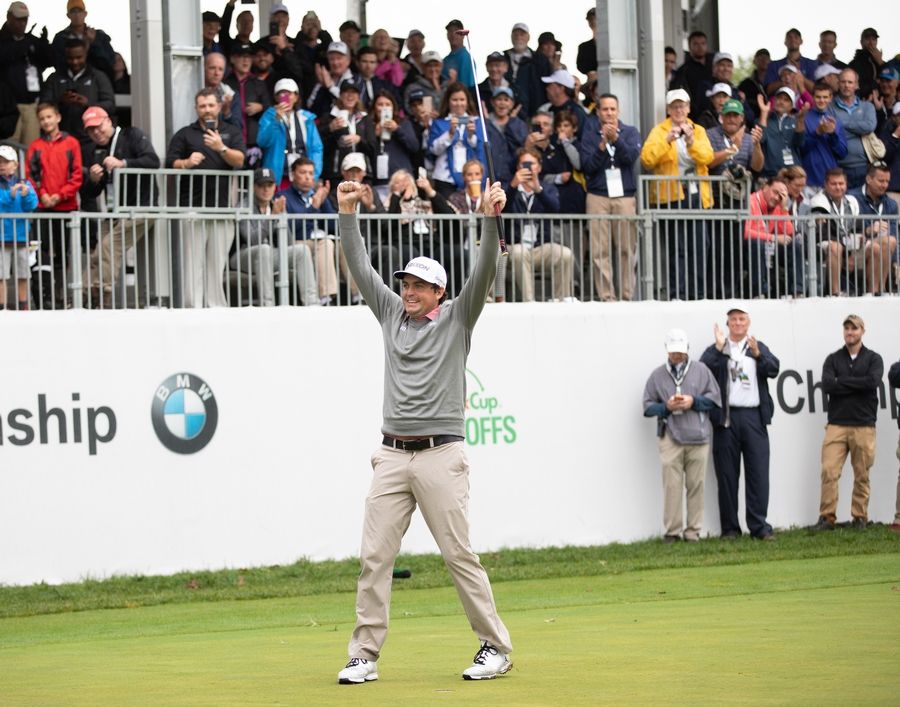 Keegan Bradley is a worthy pitch man for the BMW Championship and Medinah Country Club.

As the reigning champ, Bradley is building some buzz around the $9.25 million event in August, the penultimate leg of the PGA Tour playoff series. But who better than Bradley to speak of the golf fandom surrounding Medinah? 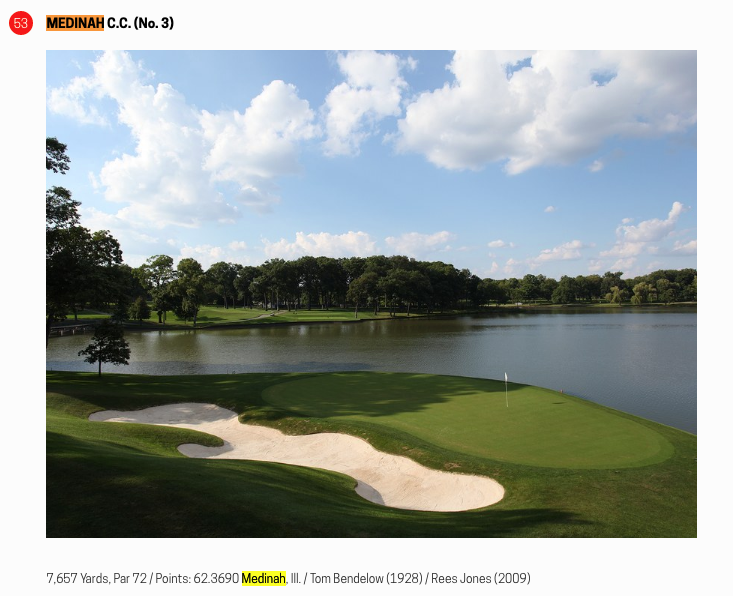 The results are in! America's 100 Greatest Courses

The Golf Digest Rankings for America's 100 Greatest Golf Courses are in. Medinah Country Club's Course #3 comes in at #53! 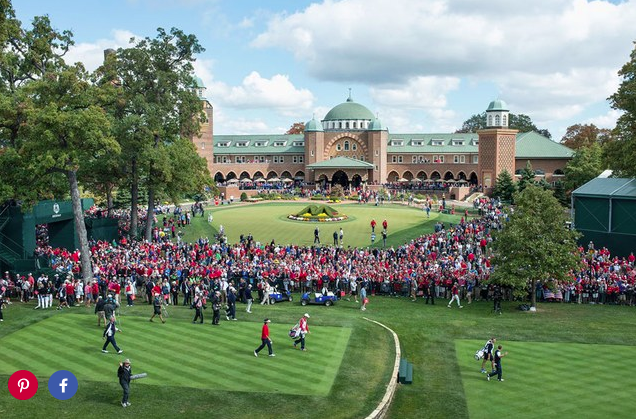 The Most Beautiful Clubhouse in Every State in America

AD travels around the U.S. to reveal the most stunning buildings that very few ever get to see 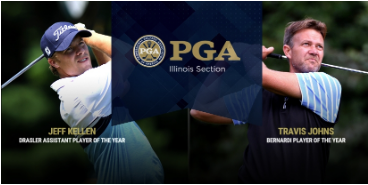 Travis had an incredible playing season. His stroke average was 69.9 spanning over 14 rounds. Included in those rounds were an astounding 61 birdies! Seven of the nine tournaments had Travis finishing in the Top Five. 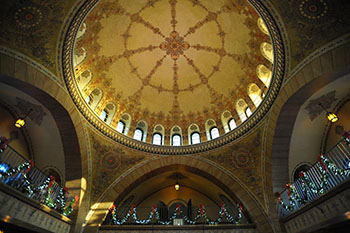 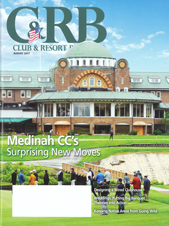 As it continues to enhance its status as a golf mecca, the suburban Chicago property has also stepped up its game to provide a full range of year-round, family-oriented attractions. 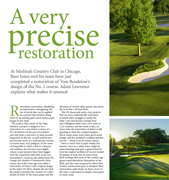 At Medinah Country Club in Chicago, Rees Jones and his team have just completed a restoration of Tom Bendelow's design of the No. 2 course. Adam Lawrence explains what makes it unusual.

Pro To Pro: "Golf For Life Program Debuts at Medinah

Medinah Country Club is trying to engage members and grow the game through a new initiative stared by PGA Director of golf Marty DeAngelo called "Golf For Life."

MCC is the Midwest's best-known golf brute. Ten Chicagoland courses have hosted a U.S. Open or PGA Championship, but none of the other nine possess MCC's major-championship pedigree. The club's resume includes three U.S. Opens, two PGA Championships and the patriotic puncher known as the Ryder Cup. MCC supports 54 holes of golf.

Medinah Country Club, one of America's most iconic golf facilities and the host of seven national and significant championships during its 93-year history, unveiled its Course No. 2, following a year-long restoration.

The garden he had planted on club grounds features 25 raised beds for fruit, vegetables and herbs, plus fragrant and edible flowers—57 seven different products total—all grown from seed. Utilizing extra space in the middle of the garden, Ponzio erected a chicken coop that houses 40 hens that produce impeccably fresh eggs (all USDA certified).

Coinciding with the reopening of the property's No. 2 Course in June, the program is designed to motivate golfers of all levels to work toward specific targets, while allowing them to improve within the confines of their abilities. Key to the program is the placement of seven tee boxes on each hole, along with the introduction of special events.

There have been several renovations to the golf courses and its facilities in the last decade and this summer, Medinah plans to unveil Course #2 after a series of restoration programs that lasted over a year. This renovation caters to the future of golf by customizing seven tees on each of the holes so that it can be accommodating to any skill level.

A project to restore the No.2 Course at Medinah Country Club near Chicago, Illinois, is set to reach completion this summer

Medinah Country Club Course No. 2 Renovation To Be Revealed In June

Medinah, Ill. (March 7, 2017) – One of America's most iconic golf venues, Medinah Country Club, will unveil its venerable Course No. 2 early this summer following a year-long restoration program. The most significant features of Course No. 2 now can remain relevant to the game as it is played today.

Medinah (Ill.) CC to Unveil Course No. 2 Renovation in June

The Tom Bendelow-designed course is being restored to its original look and strategy while being fitted with seven tee boxes to accommodate a wider range of golfers and support its "Golf Fore Life" development program.

Chickens, bees, maple trees, and an organic garden bring healthy dining to one of America's most prestigious private clubs.

The 93-year-old property features an organic garden with 34 different fruits and vegetables, 17 savory herbs and garnishes, and six varieties of fragrant and edible flowers.

Golf Digest Panelist Comments:
"It has length at 7,657 yards par 72 and the greens after Rees Jones remodeled them in the latest renovation have become harder."

Medinah Country Club is officially back on the PGA Tour schedule.

The Western Golf Association announced today that the west suburban golf course will host the 2019 BMW Championship. That brings the pro golf tournament back for the first time since 1966, when it was known as the Western Open.

Future Sites For The BMW Championship

2019: Medinah Country Club, Medinah, Illinois
The 2019 BMW Championship will be the latest in a long list of prestigious events contested on this iconic golf club's famed No. 3 course on Chicago's Northwest side, including three previous Western Opens.

Medinah Could Host the 2019 BMW Championship

Medinah Country Club members will vote June 13 on whether to be the host for the 2019 BMW Championship, the Tribune has learned.

A "yes" vote would be a boon to golf fans who want to keep Chicago in the PGA Tour's FedEx Cup playoff rotation.

Medinah to embark on $3.6 million renovation of Course No. 2

Medinah Country Club has approved a $3.6 million project to restore the club's Course No. 2 to its original character while upgrading its infrastructure to 21st-century standards.

A Piece of the Game

Emmy Award winner for Outstanding Sports Series in the November 2014 episode of "A Piece of the Game." Was shot at Medinah Country Club. View the video. 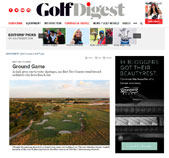 Revisit the excitement of the 39th Ryder Cup held at Medinah Country Club.