Platinum Clubs ranks Medinah thirty-fourth in the world, twelveth in America, and first in Illinois! 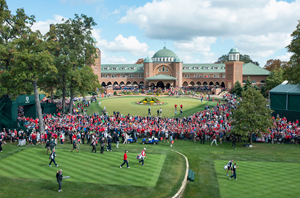 Medinah Country Club is one of only two clubs to have hosted the U.S. Open, PGA Championship, Ryder Cup, U.S. Senior Open and Western Open and in 2019, the penultimate event of the PGA TOUR FedEx Cup Playoff Series - the BMW Championship!

Medinah is the only private country club in Illinois with 54 holes!

Medinah is a great blend of its nearly 100-year heritage (since 1924), coupled with an approximately $20 million recent facility update and improvements!

"Everyone wants to go where everybody knows your name." At Medinah Country Club, members raise their families and meet and make lifelong friends, every day!