The proposed new rules speak to the high standards of conduct expected from players.2019 Rule: Rule 1.2a will consolidate the expected standards of player conduct:

Rule 1.2b will also give the Committee authority to adopt its own Code of Conduct and to set penalties for its breach (see Explanation for Proposed Rule Change – Code of Player Conduct).

Golf is a sport in which high standards of conduct are expected from players, and the Rules should declare this in a clear and direct way.

Although the current Rule book has a separate Etiquette Section that covers the most important aspects of the spirit of the game:

Using Rule 1.2a to explain playing in the spirit of the game will help in:

Committees are given authority to adopt their own code of player conduct and to set penalties for beaches of that code.

The Committee will also still be able to disqualify a player for serious misconduct that is contrary to the spirit of the game, as emphasized in new Rule 1.2a (see Explanation for Proposed Rule Change – Expected Standards of Player Conduct).

Some Committees have requested additional means under the Rules to allow them to address player conduct that is contrary to expected standards that are central to the game (such as courtesy and sportsmanship).

The proposed Rule change will give Committees flexibility to set and enforce standards of conduct specific to their competitions and players, should they choose to do so.

When you have good reason to mark and lift your ball, you are no longer required to first announce your intention.

The Rules generally rely on the integrity of the player.

Eliminating the announcement requirements for these three situations will simplify the Rules, bring consistency to the approach of trusting the player and eliminate an unnecessary procedural penalty for simply not informing an appropriate person.

This change should also speed up play because a player will no longer need to take the time to inform another player of the intent to lift and to wait to see if that other player wants to come over to observe the lifting and replacement of the ball. 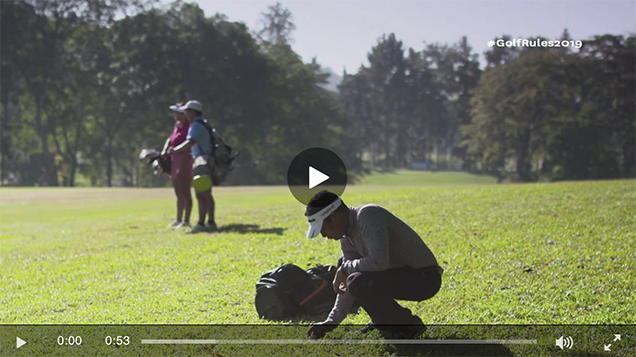 A player's reasonable judgment will not be second-guessed based on later evidence.

2019 Rule: Decision 34-3/10, a new decision introduced in April 2017, will be incorporated into the Rules as Rule 1.3b(2) so that when the player estimates or measures a spot, point, line, area or other location, his or her reasonable judgment is accepted:

The Rules generally rely on the integrity of the player, and this is a natural and appropriate extension of this trust in the player.

There are many times when the Rules require a player to estimate or measure a spot, point, line, area or other location, such as when the player:

Such judgments need to be made promptly, and players often cannot be precise in doing so.

So long as the player did all that could be reasonably expected under the circumstances:

Accepting a player’s reasonable judgment limits the detailed analysis that can arise from the use of enhanced technology (such as video review when golf is televised).